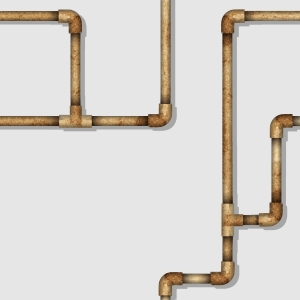 The squeaking was annoying. Every time we turned on the water, the pipes whistled. Not loudly, but enough that it was maddening. Added to the chaos that exists in a small house with two boisterous boys, any added sounds can be too much. The whistling pipes had to go.

My brother-in-law works in maintenance at the local high school and agreed to check out our pipes. They were located in the crawl space and that was home to…spiders. We had finally gotten the mouse problem under control and just let the spiders stay. After all, they were not IN the house, so that worked with the pact I had with God.  Outside insects and animals lived…inside pests and animals were in danger of certain death.

Lest you needlessly worry, we did not have any pets at that time, so there was no danger to domestic animals.

So, into the crawl space went my brother-in-law. We expected him to find and fix some small problem with our water pipes. What he found was certainly not what we expected. Oh he found out why the pipes were squeaking and a more.

I got the call later that morning. “Colleen, you can’t stay here.” I, of course, imagined a spider the size of those in a horror movie. I was wrong, and the reality was worse.

He found the cause of the noise in the water lines. One of the PVC pipes had a compressed area – almost like a drinking straw smashed between your thumb and finger – it was squashed. Whenever you turned the water on, the fluid trying to get through the flattened pipe made a noise.

But, that wasn’t the big problem. While he was looking at the water pipes, he noticed that the gas lines had holes. Plural. Not just a leak, but many. Some were very small, but he as able to put his pinky into one of them. I didn’t ask if the spiders had survived this gas chamber. I was more worried about my children.

My brother-in-law and husband had already contacted someone about the gas line before they called me at work. His words after inspecting our lines was “I don’t know how this house didn’t blow up with those holes in the line.”

I’m glad nobody smokes, especially the men going under the house. However, with this new knowledge, I did cringe at how often I lit the pilot light in the kitchen stove. In thinking back, we had been waking up with headaches and upset stomachs. I was now grateful that the old gray farmhouse had leaks. The mice got in, but enough of the gas escaped so that we remained alive.

We left the house while the landlord repaired the gas lines, grateful that we found out in time. Not unexpectedly, when we were able to get away from the leaking gas lines, our health improved and the headaches disappeared.

The gas line corrosion had an explanation. My brother-in-law was more perplexed about the water line. There was no heat source near it that could have caused it to “melt.” However, I believe I know the answer. It was God.

I think that when we ignored the physical symptoms associated with leaking gas, he simply reached down and squeezed the pipe so that it would make a sound and get us to go under the house to fix that problem.

We were spared of a gas leak and/or explosion because of a noisy water pipe. Thanking God..and still amazed at His mercy and protection.

The Mouse House and Prayer…Part 1